The Best Glass For a Gin and Tonic: The Copa de Balón

Does it matter which glass you serve a G&T in?  We think so.  With all of the care and attention lavished upon the creation of beautiful gins, which tonic to pair them with, and of course the all important garnish, the choice of glassware is often left unexplored and unexplained.

In the British Isles, traditionally, a gin and tonic would be served in a tall and thin highball glass – this is back in the days when “ice and a slice?” was a question and the slice was lemon, or lemon.  Highball glasses are great for long drinks made with lots of ice and a mixer, such as a gin fizz or a Tom Collins, because the limited surface area keeps your drink colder for longer and stops the carbonation from disappearing.  Whilst they’re ok for a gin and tonic though, these days you are far more likely to see a G&T served in a wine glass or a Spanish style copa de balón glass.  Why is that?

Popularised by the Spanish, who incidentally lead Europe for gin consumption per capita, the copa de balón is essentially an oversized, bulbous, wine glass that originated from the Basque region.  Much like a wine glass, the large bowl of the glass (copa de balón can be roughly translated as a “ball” or “balloon” cup) traps and accentuates aromas.  Because smell is so crucial to how we experience taste, the copa de balón enhances the aromas of the headline botanicals in a gin allowing the drinker to experience the flavours of the spirit more fully.  To further accentuate flavour, there is also more space in a copa glass for garnishes, which has in part been responsible for the growth in popularity of specific perfect serve” garnishes or multiple garnish ingredients in a gin and tonic.

The resurgence in popularity of the copa glasses however, is all to do with temperature.  It is said that the trend was led by Spanish chefs who would order a G&T in a wine glass (reportedly a large Bordeaux glass for red wine) whilst they were working in the kitchen, because they could hold a larger mass of ice and keep their drink colder for longer (the larger the mass of a given volume, the better it is at maintaining its temperature).  Add to this a stem to hold the glass by, thus reducing the warming effect of the drinker’s hand on the glass, and you have the recipe for a G&T that won’t cool down so quickly, or be diluted by melting ice. 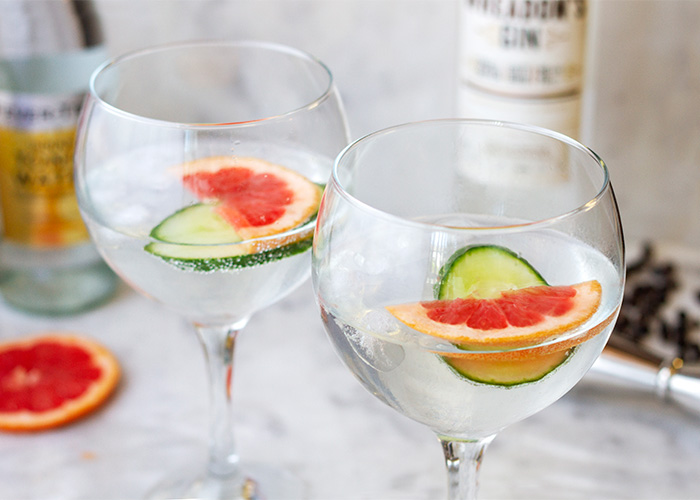 The important thing to remember, if you are making yourself a Wheadon’s and tonic at home this weekend in a copa de balón glass, or perhaps in a nice large red wine glass, is to be aware of quantities; just because there is more space in your glass, there is no need to fill it with more tonic.  Stick to a gin to tonic ratio of between 1:3 or 1:4, which means that for a 50ml measure you won’t use the entire contents of a small bottle of tonic.  Home serves are notoriously generous, but as long as you stick to that ratio, you’ll have constructed a good gin and tonic.  Chill your glass in the freezer before hand and use large cubes of ice, so that they don’t melt as fast.  One of the benefits of a copa glass discussed is the space for aromas to be trapped, so you want to leave some space in the glass and not fill it right to the top!

Now, compare your large, cold, aromatic and well garnished G&T in a copa or large wine glass with the one drank from the highball glass that you were going to reach for, and you’ll see why we think the choice of glass is important for the perfect serve.

Enjoy your Wheadon’s and tonic this weekend.  In an appropriate glass, of course…