Naming a cocktail after an item of field artillery is surely an indication that drinking it might knock you off your feet. Whilst the classic French 75 can indeed be powerful, it is in fact a classy and elegant affair more closely associated with France in the 1920s than a canon. The simplicity of the recipe and the bubbles make the French 75 the perfect choice for Christmas drinks parties, Christmas day brunch, a festive season aperitif… New Years Eve toasts… need we continue?

An amalgamation of the Champagne cup cocktail that was popular through the 19th Century and a Tom Collins, the origins of the French 75 can be roughly dated to the tail end of WWI, however its history is long and rather convoluted. As is the way with so many of the best classic cocktails.

Named for the Canon de 75 modèle 1897, a rapid-fire field canon developed and deployed by the French Army through the late 19th and early 20th Centuries, it was widely regarded as the first example of modern artillery and relied upon heavily by the French military during World War One. It became such a symbol of hope for the French that a Parisian bartender named a cocktail for it. Originally consisting of equal parts gin, grenadine and brandy with a dash of lemon juice, the “Soixante-Quinze” is unrecognisable from today’s French 75. Thought to have been taken up by the infamous and international Harry MacElhone, another bartender mixing drinks in Paris at the time, the recipe travelled to London and New York morphing as it went. MacElhone featured the ”75” cocktail in his 1926 book “Harry’s ABC of Mixing Cocktails”. Over the years the recipe refined and the choice of glassware changed, from a classic cocktail glass to a tall Collins glass and finally, at some point in the 1980s, a Champagne flute. These days the French 75 is a classy combination of gin, sweet, sour and fizz, but don’t let its elegance conceal the fact that it’s named for a powerful canon with good reason. 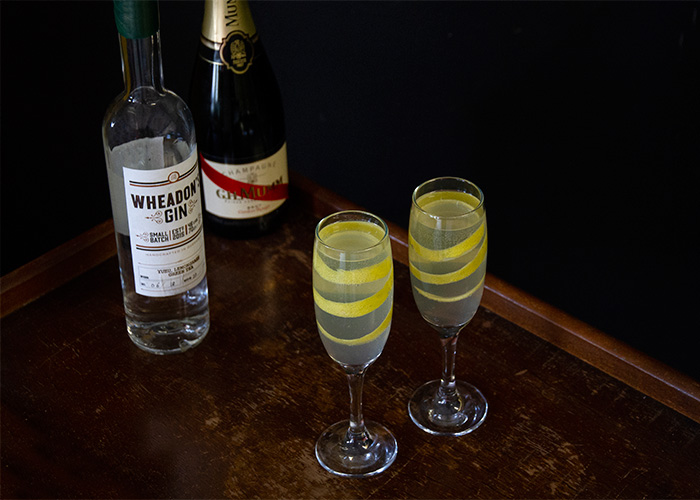