Winter is the season for citrus fruit, which makes it an exciting and busy time of year for us here at Wheadon's Gin.  One fruit that has a particularly short season are Seville oranges, with the Spanish citrus fruit often being available for only six short weeks through January and February.  Seville oranges are synonymous with marmalade, and so it seems apt that as the season for Sevilles draws to a close we celebrate this classic bittersweet breakfast flavour with the classic marmalade cocktail. 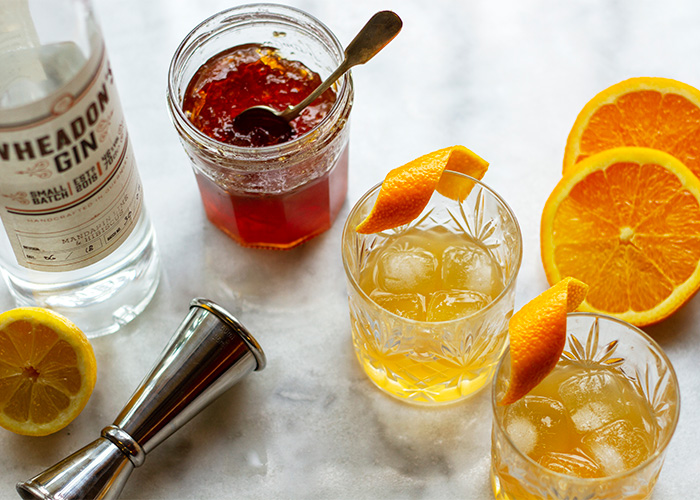 "By its bitter-sweet taste, this cocktail is especially suited to be a luncheon aperitif" - Harry Cradock

First appearing in Harry Cradock's famous 1930 Savoy Cocktail Book, the original recipe served six people.  We've revised it for a single serve, and you can find various different interpretations of the original marmalade; the most well-known being the English Marmalade created at the Hawksmoor restaurant in Spitalfields, London, which uses less marmalade but adds a half measure of Campari and a dash of orange bitters to create a more complex, bittersweet cocktail.  We suggest using Wheadon's mandarin lime and hibiscus infusion for your marmalade (Seville oranges were originally a hybrid of the mandarin and the pomelo).

Place the marmalade in your shaker and add the gin.  Stir together, pressing the marmalade against the side of the shaker to break it up.  Add the lemon juice and cube ice, and shake hard to break up the marmalade and combine.  Strain into a chilled glass, the cut a thumb-sized piece of orange peel and remove the pith.  Squeeze the orange peel over the drink to release the essential oils, before twisting into a spiral and hooking over the rim of the glass as a garnish.