Every September, renowned forager John Wright visits our neighbouring island of Sark  to headline Stocks Hotel’s foraging weekend.  John rose to fame as the foraging expert on Hugh Fearnley-Whittingstall’s River Cottage television shows, and is the author of four foragers’ guides for the River Cottage Handbook series (Mushrooms, Seashore, Hedgerows and Booze).  Over the course of the Sark foraging weekend he leads two walks, one searching for edibles in the hedgerows and woodlands of the island and the other along its shoreline, and this year we were delighted to be involved. 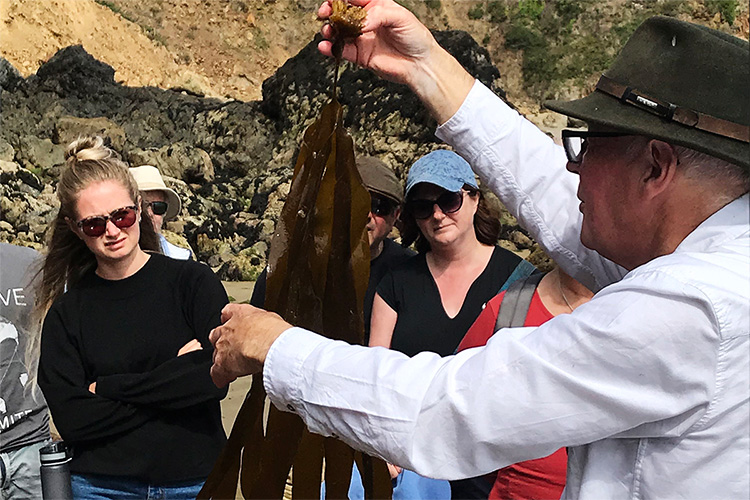 Luke Wheadon and the Bella Luce’s head chef Patricio Filipe packed up one of our ten litre copper alembic pot stills and hopped on the boat over to Sark last weekend, and joined John for a forage before the guests arrived, searching for wild ingredients for a very special limited edition gin.  They distilled individual botanicals so that Luke could determine which would work in a gin, before settling upon a recipe and then joining the guests on John’s walks. 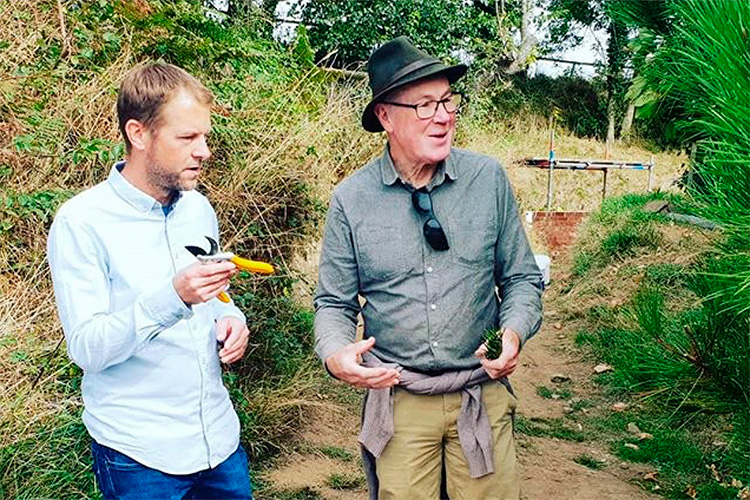 Labeled as “Stocks’ Foraged Achilles Gin”, we distilled a single batch of 11 bottles which are only available to enjoy at the bar of Stocks Hotel, Sark.  Stocks have been great supporters of Wheadon’s Gin from the beginning, and it was great to have the opportunity to head over and visit them again and to distill a signature gin for them using botanicals foraged on Sark. 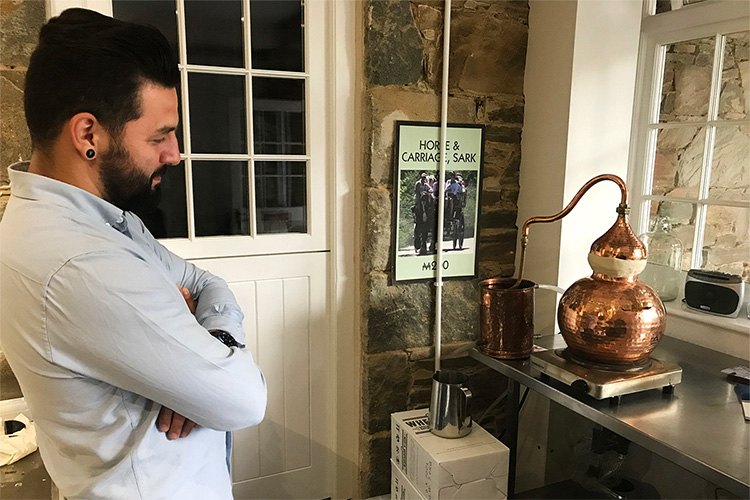 On our walks with John around Sark we collected, amongst other things, yarrow (Achillea millefolium), Hogsweed and pine needles as potential botanicals, and learnt a great deal about all of the edibles available to us that grow on these islands.  Luke and Patrick are experienced foragers, but to spend time in the company of the man who quite literally “wrote the book” was very special.  His knowledge of wild ingredients was incredible. 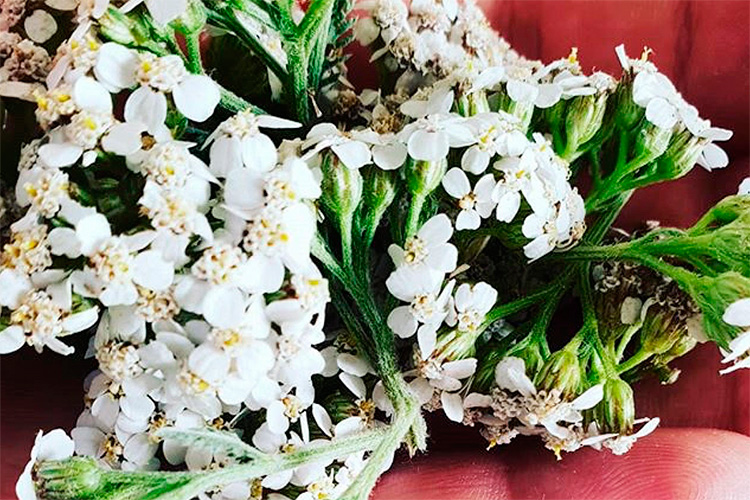 Yarrow is a common and drought resistant perennial wildflower that flourishes in hedgerows and meadows, and which was used historically (in the middle ages) to flavour beer as part of a herbal mixture known as gruit.  It is a mild aromatic, and was also valued as a medicinal herb for its astringent properties that led it to be known by the common names of woundwort, arrow-root and nosebleed due to it being used to reduce the blood loss from wounds.  The mythical Greek character Achilles was said to have had his soldiers carry yarrow to treat wounds on the battlefield, which is where the genus name Achillea originates from.  Luke included yarrow as the headline flavour in our mix which also featured mandarin orange from Guernsey and 11 other fragrant botanicals to create a rounded gin designed, as all of our signature expressions are, to be enjoyed primarily in a gin and tonic. 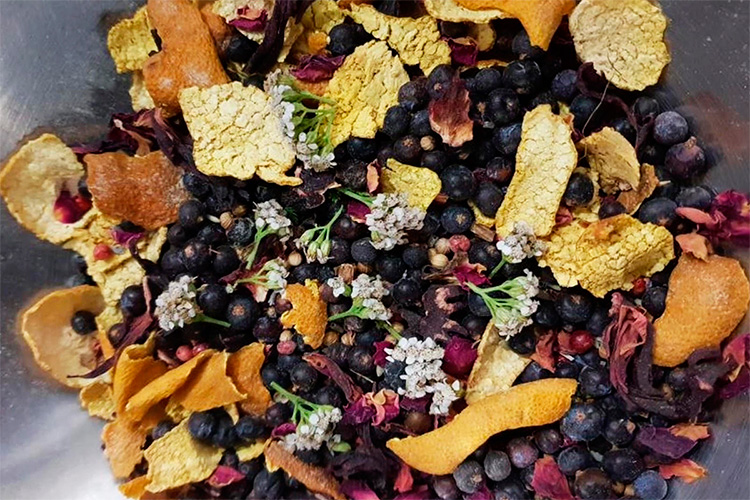 “We picked quite a few different things during our time with John, including Yaro, Hogsweed and Pine. In the afternoon I distilled some of these down to see which of them would work. The Yaro was incredible and so I set out to produce an entirely unique gin with that as the headline flavour.”

The gin takes its name from the Latin for Yaro, and is called Stock's foraged Achilles gin.

Sark is a beautiful and special island; lying ten miles to the east of Guernsey it is a royal fief and a car-less island (the only vehicles are tractors and horse-drawn carriages and carts) that was designated the first Dark Sky island in the world due to lack of light pollution.  It’s a popular day-trip destination from Guernsey, but with this very special and super limited expression of Wheadon’s Gin now sat behind the bar at Stocks Hotel for guests to enjoy, there’s a very good reason to make your visit an overnight one. 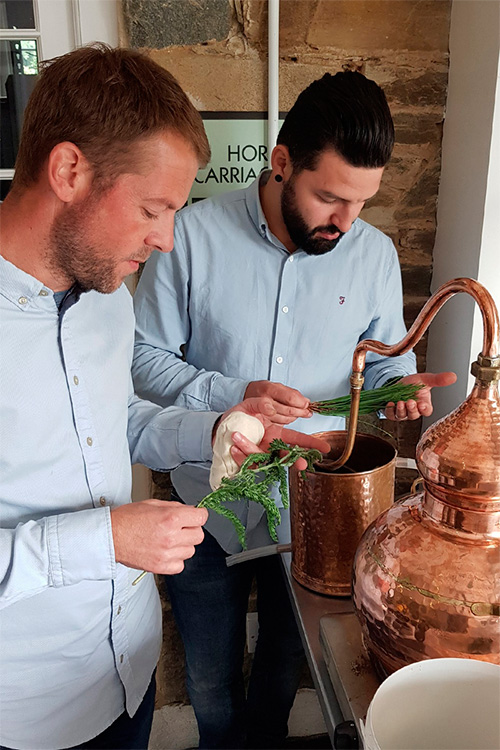 You can find out more about John over on his website www.ediblebush.com, and if you can’t wait until next September to join his weekend on Sark then you can find the dates of the foraging forays that he hosts in Dorset, Devon and Hampshire there also.  We would highly recommend spending some time outside in his company.