Off all the gins, in all the world, the one uniting ingredient is juniper.  Without the berries of this evergreen conifer gin simply wouldn’t be gin (legally!); it gives our favourite liquid both its base flavour, and its name (the Dutch named their juniper-based spirit jenever, and it mutated into genever and then gin when it crossed the English Channel in the 16th and 17th centuries).

Whilst the popularity of gin has exploded in recent years, the plant that produces the berries that we covet so much has been declining on British soils for decades and experts have predicted that it could become extinct across much of lowland England within half a century.  Juniper is a “pioneer” species that grows well on bare ground, and was one of the first plants to colonise Britain after the last ice age.  Because juniper plants can take decades to reach maturity and their seeds require very specific conditions in order to germinate and grow, not to mention are a favoured food source for livestock and small mammals such as rabbits, new plants are not coming up to replace England’s ageing population.  In addition to all of this, an accidentally-imported fungus-like disease, Phytophthora austrocedri, which causes foliage to die back and eventual plant death, was first discovered in juniper in Britain in 2011 and has decimated some juniper populations.  This perfect storm has led to juniper being described by Plantlife’s botanical expert, Dr Trevor Dines, as “the panda of the plant world”. 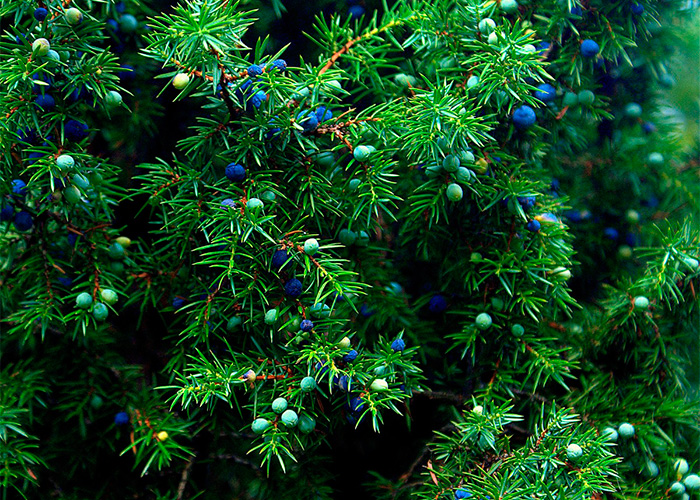 Whilst most of the juniper berries used in gin production is imported from eastern and southern Europe, the survival of this plant in England is something that all of us who enjoy a G&T should be supporting.  Luckily for us then, that Britain’s wild plant conservation charity Plantlife has succeeded in reestablishing juniper bushes in Gloucestershire, Wiltshire, Hampshire, Sussex, Oxfordshire and Buckinghamshire.  A decade ago, right on the “B” of the current gin boom, they created 13 nursery sites on chalk lowlands where they stripped off the turf and some topsoil, exposing the bare earth that juniper seeds would normally colonise.  After two winters the wild seeds that they had planted germinated, and began to grow.  At some of their nursery sites the young plants were protected from grazing by wire cages; now, a decade on they have numerous 2-3 foot tall plants, some of which are already bearing berries.  Juniper berries take around eighteen months to mature, so productive bushes will often host a mixture of young green berries and ripe purple ones.  In addition to reviving common juniper, these nurseries also create valuable habitats for wildflowers, insects and birds, including some that rely on juniper for a food source such as the caterpillars of the juniper carpet moth and juniper shield bug.

It’s early days for the revival and return of juniper in England’s southern counties, but this news from November 2019 is a promising start and a welcome piece of positive news so soon after the State of Nature 2019 report announced that the UK’s wildlife has continued to decline.  You can help Plantlife to continue their great work protecting juniper (alongside other native plants and wildflowers) so that the Great British gin-drinkers can enjoy gin security, by making a donation via the Plantlife website.  Long live juniper!  Long live Gin!  We'll certainly raise a glass to that.